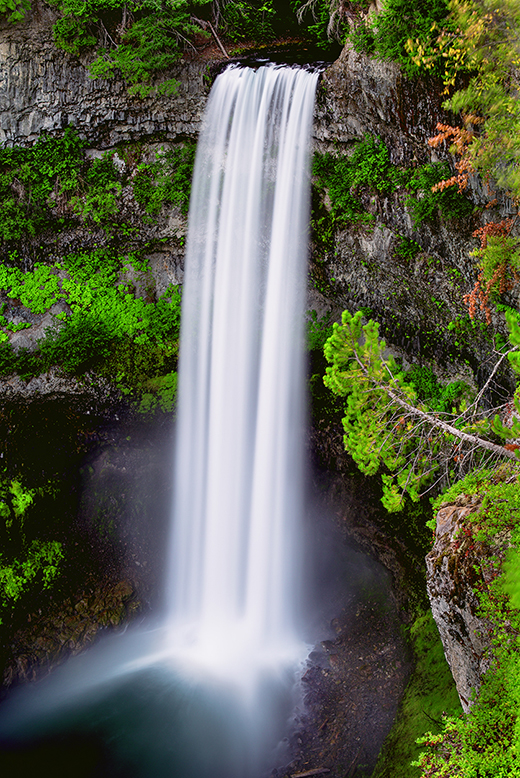 It’s said that the motion of a waterfall fills your body with negative ions leaving you rich with energy and full of vitality. If you’ve stood near a waterfall, I think you’d agree that the powerful rumbling and the mist on your skin, offers you a deep and meaningful connection to nature.

Located in Squamish, British Columbia, on Canada’s West Coast, the waterfall at Brandywine Falls drops 70 meters (or 230 feet) to a cavern below which holds the remnants of rockslides from years gone by. The waterfall, appearing silky from its speed, reaches the bottom in only ten seconds. The magnificent roar and cold mist provide an awe-inspiring sensory experience.

Taken on a late summer evening in August, the creation of ‘White Satin’ , resulted from the right equipment and editing to maintain a sense of cascading water, while highlighting the crisp, clear detail of the rock and foliage in the background. The lustrous sheen of the water beautifully reflects the light looking like strands of exquisite white silk.

Long before Brandywine Falls was established as a provincial park in 1973, the area was a well-known destination for sightseers, hikers, and campers. The falls are storied to be named after a competition between two surveyors in the late 1800s. In this version, Jack Nelson and Bob Mollison, two surveyors for the Howe Sound and Northern Railway (which became part of the PGE Railway), wagered a bottle of brandy on which of them could more accurately estimate the height of the falls. The word brandy is actually the shortened word for Brandywine. When the height was formally measured with a chain, it was Mollison who won a bottle of brandy and Nelson then named the falls Brandywine.

Many cultures consider waterfalls to be sacred. Acting as a spiritual cleanser, it’s believed that waterfalls offer the ability to heal. Although incredibly powerful and otherwise intimidating, those standing near waterfalls can attest to their tranquil and healing powers. The endless flow of water further denotes a sense of abundance.

Waterfalls are special to me and represent my deep connection to nature. Canadians are blessed with an abundance of natural wonders with enough lakes, mountains, and rivers to explore for a lifetime. Luck for me, that’s exactly what I plan to do.