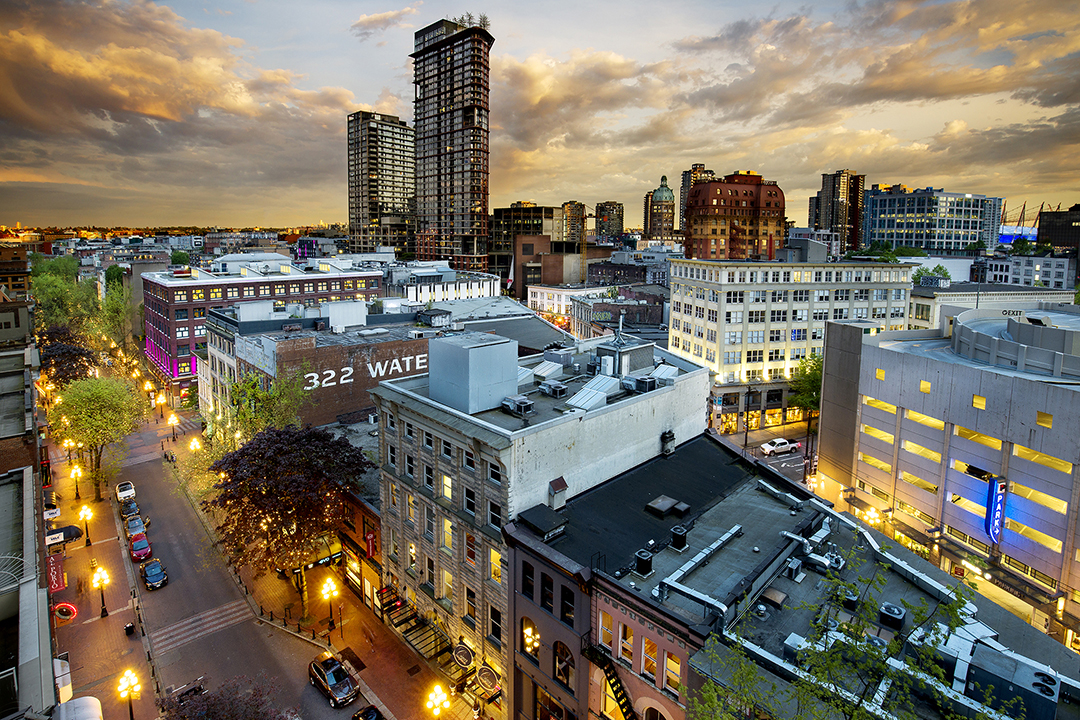 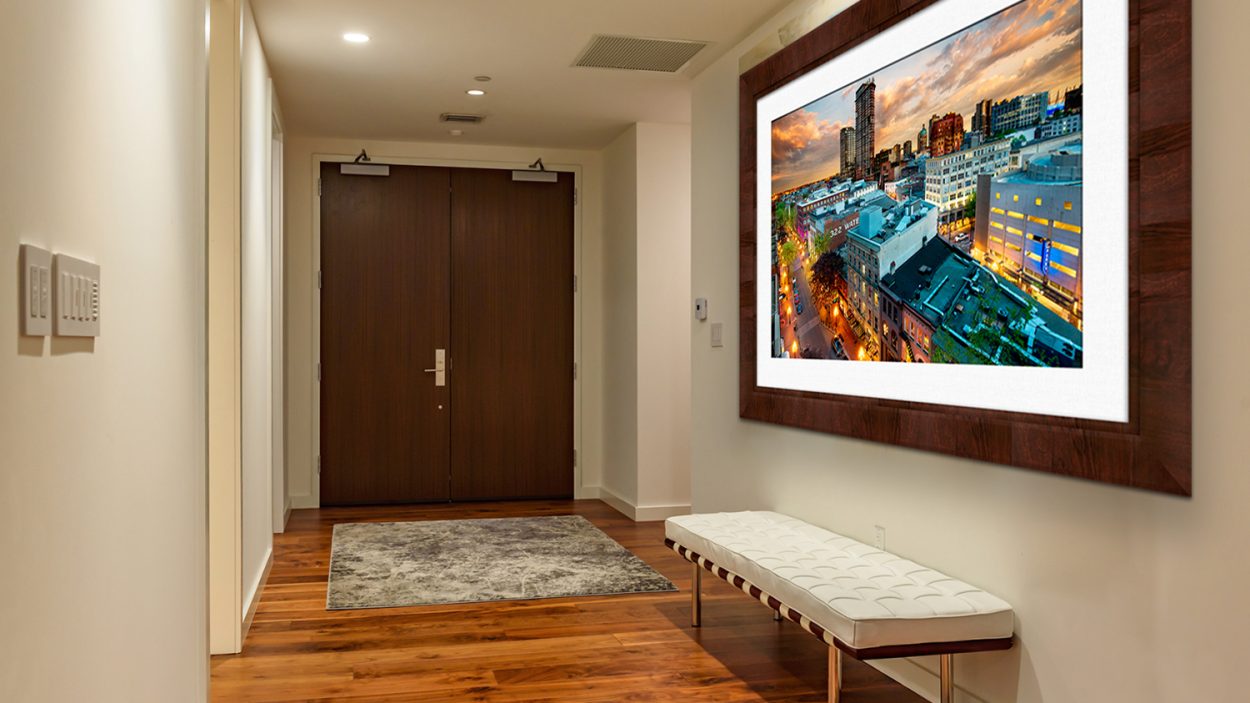 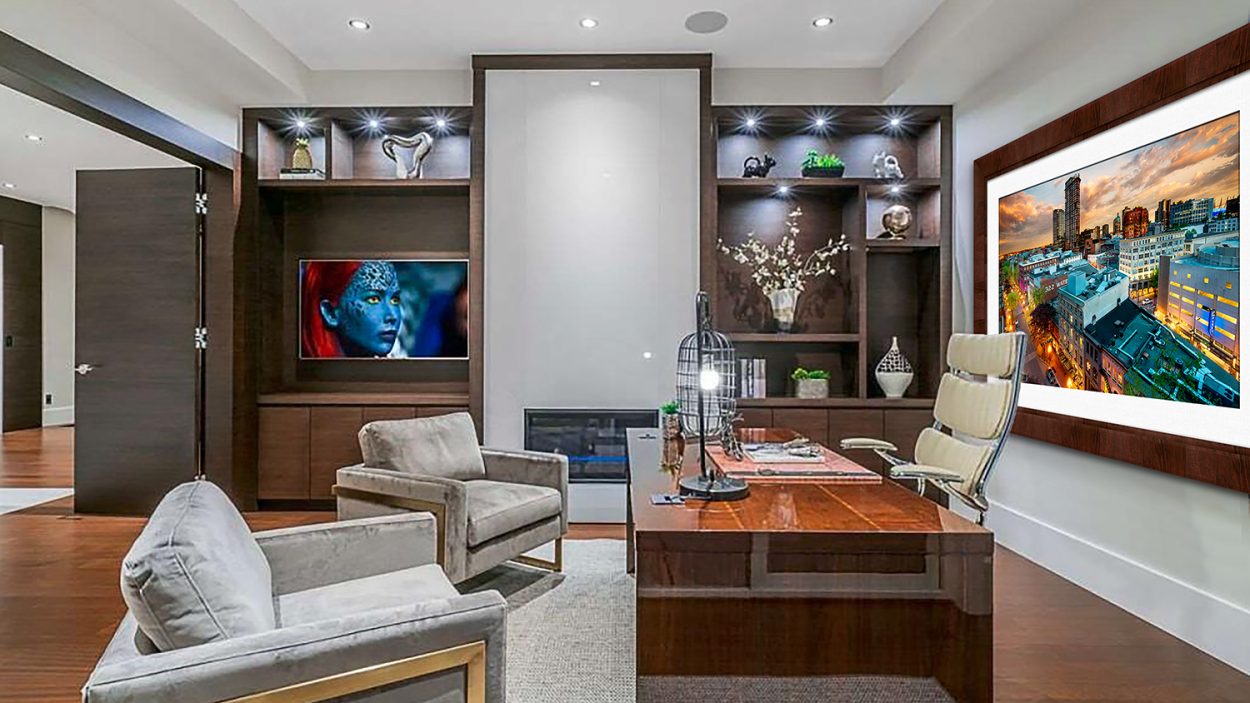 As lighting is the key to most great images, I spent six nights in Gastown – Vancouver, BC waiting for just perfect light. For this shot, I wanted, and ultimately received, dramatic skies and ambient street light. I love the lighting, in particular, the light in the sky and the way the clouds envelope the tall building in the centre of the image. Not only waiting for great lighting to capture this image I also scoured Gastown that week looking for a good photographic perspective.

I looked all over, from down on the street, to overpasses, walkways, the roofs of parking garages, and the roofs of other buildings in the area. Looking to place the Woodward’s building in the middle of the image, I hoped, using the landscape in the foreground, to draw your eye into the image. Having thankfully received roof access, I was able to capture this stunning scene after waiting for the sun to set, the clouds to shift, and for just the right light.

Here, in the historic Gastown neighbourhood, the most obvious building in the image is the Woodward’s Building stretching high into the sky. From this vantage point, it looks like the clouds are hugging the tower. Gastown was designated a National Historic Site in 2009. Now, there are only remnants of Gastown’s checkered history. The red brick architecture, like that seen at 322 Water Street, is reminiscent of the past, while the shiny glass-encased buildings scattered nearby represent modern renovations and future investments.

Locals called it Gastown because the first saloon was started by Jack Deighton, a Yorkshire seaman, steamboat captain and barkeep who arrived in 1867 to open the area’s first saloon. He became known as “Gassy Jack” because he loved to talk — apparently for hours. “To gas” is period English slang for “to boast and to exaggerate.” In 1870 the community was laid out as the “township of Granville” which honored Granville Leveson-Gower, 2nd Earl Granville who was British Secretary of State for the Colonies at the time of local settlement. At one point, it was considered the centre of drinking life with over 300 licensed establishments in only twelve blocks.

In 1886 it was incorporated as the City of Vancouver, named after Captain George Vancouver, who accompanied James Cook on his voyage to the West Coast and subsequently spent two years exploring and charting the West Coast. Gastown fell victim to the Great Vancouver Fire that same year, losing all but two of its buildings. Situated alongside the Burrard Inlet, Gastown was a sensical place to house and entertain loggers, fishermen, crews, and captains. Acting as the main port of western Canada, much of the trading of goods from East Asia moved through this area.

After the Great Depression, the town was a largely forgotten neighbourhood full of cheap hotels and beer parlours, quickly falling into decay and disorder. The infamous neighborhood showcases some of the city’s best Victorian Italianate, Edwardian Commercial and Romanesque architecture dating back to the 1800s. In the 1960s, local citizen groups became increasingly concerned with preserving Gastown’s distinctive and historic architecture. Soon after, gentrification occurred with shops, restaurants, offices, and galleries opening on the street.

Gastown is central to Vancouver’s position as one of the most cosmopolitan cities in the world, providing a rich, textured backdrop for the group of entrepreneurs that are drawn to this area. It’s not surprising that in 2012, Gastown was named the fourth most stylish neighbourhood in the world, setting trends from the historic heart of the city. The eclectic energy here matches its diversity.

Allowing your eyes wander into the streets of this image, you’re immediately taken right back into the time period where Gastown was a bustling hub of activity. You can almost hear the sound of tires bouncing over the cobblestone streets, jazz music from bars pouring out into the streets, and people socializing on the streets as they enjoy a leisurely.