The Heart of China 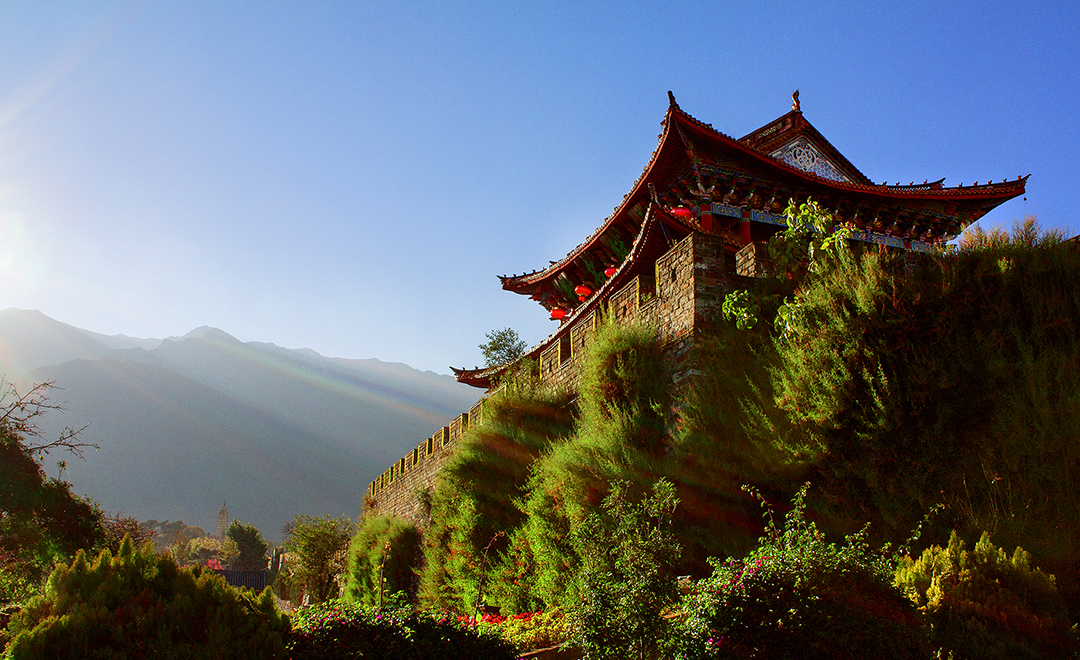 Learn More
The Heart of China
Starting At:
$1,450.00
Limited Edition:
45
Complimentary Rendering:
See it in Your Home
Shop Now

In 2011, I was fortunate enough to explore a few of the most remote areas of China. Walking through Dali, this ancient walled city that dates back to the 14th century, I was struck by the dichotomy of the new and old intertwined within the city. I became increasingly curious about the perspective of this city from outside its walls. By traveling outside the walls, I was able to envision what people would have seen as they arrived here, viewing this impressive architecture for the first time.

Here, common Chinese architecture is evident — a curving roof with ceramic tiles. Overhanging eaves provided shelter from both rain and sun. And, although the strong and prominent brick wall certainly offers protection, it also acts as a reminder of the group (rather than individualistic) mentality that is common to Chinese culture. While Chinese temples might be Buddhist, Daoist, or Confucian, the bright red detailing here indicates a likely Buddhist temple.

Similar to many Chinese temples, this one is constructed amongst trees, on a hilltop, in a secluded locale. It is believed that a temple’s physical setting is crucially important to one’s overall religious experience. Although I’m not certain, it is likely to have an axis oriented north-south, with its most important features like the entrance facing south, towards the sun. Those entering the temple would commonly do so through the left while exiting to the right.

It is not surprising that this temple is similar in appearance and design to many Chinese temples. After all, heavily considered and utilized here is the art of Feng Shui – the art of design and arrangement favourable to the flow of energy. Both the symmetry and curves pay homage to the ancient Chinese wisdom practiced by the Chinese for centuries.

In ‘The Heart of China’, I love the dense brush with small pops of colour offered by the flowers. The history is marked by the ancient brick wall and the architecture from the temple above. The lighting is incredibly special as the rays of the sun are clear straight across the image. The temple sits on elevated grounds, surrounded by a range of hills that gives it protection.

Located in the Yunnan province of China, Dali is on the southern edge of the Tibetan plateau and is populated with many different ethnic minorities. Dali has long been a regional centre of commerce, and is located at a crossroads of trade routes between Tibet, China, Burma, and Southeast Asia. Dali was the capital of two large kingdoms from the 8th and 10th centuries until it was conquered by the Mongols in the 12th century. The present Old Town was rebuilt by the Ming dynasty at the beginning of the 14th century.

Outside of the Old Town are the famous Three Pagodas from the 9th and 10th century – if you look hard enough you’ll see the top of one as it’s faintly visible in the background of this image. Inside the confines of this walled city, locals, wearing brightly coloured traditional clothing, walk up and down the streets. Recently discovering its previously hidden beauty and well-preserved architecture, tourists are increasingly drawn to this remote area.

I had previously spent some time with the Lisu people in a small village up in the mountain ranges tucked behind this city. The Lisu people are a Tibeto-Burman ethnic minority group in this area. The Lisu are believed to have originated in eastern Tibet even before present Tibetans arrived in the plateau. Lisu history is passed from one generation to the next in the form of songs. Today, these songs are so long that they can take an entire night to sing.

That was an experience in my life that would forever change the way I think and see the world. It was my first step in becoming a different person, capable of seeing the world from more than one cultural perspective. In that sense, this culture shock was the first step in the process of my transformation.

It was shortly after this trip that I decided I needed to capitalize on every day. Feeling dedicated and inspired I vowed to put every ounce of energy I have into pursuing a dream to travel the far reaches of the world, returning with photographs and stories for others to enjoy.